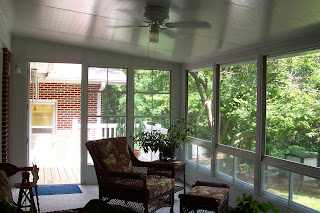 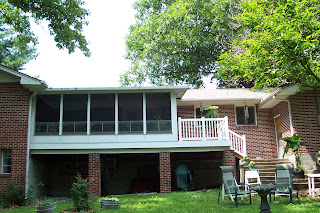 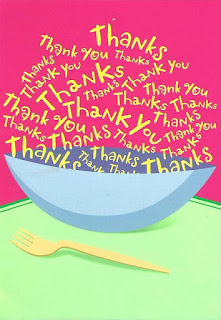 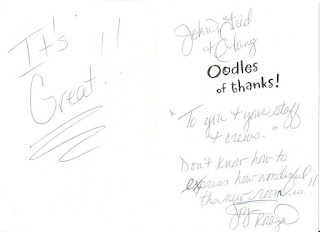 By David Tullis:
We take great pride in our workmanship. Our crews are meticulous in an obsessive way. By the time we finish a job, we've become good friends with the homeowner and although I don't mean to sound braggadocios, they love us! The feeling is mutual of course. There's great personal satisfaction in knowing that we're creating happiness and gaining a new friend at the same time! It's always awesome when we get a compliment but we're slapping high fives when we get a card like this!
Posted by Home Pro Blog at 9:44 AM No comments: 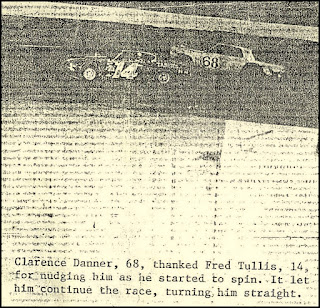 By Fred Tullis, Jr:
HomePro's FastLane Department is dedicated to Fred Tullis, Sr. and his amazing stock car racing history. A few days ago a gentleman came into the FastLane and asked my name. I said "hello, I'm Fred Tullis, Jr.". He said, "it's real nice to meet you Fred, my name is Clarence Danner". I was very surprised and delighted to meet Mr. Danner whom I knew from his several years of racing with dad. Clarence raced stock cars for 31 years and was a great driver and sportsman. He and dad were very good friends and even business associates with dad in the Auto Salvage business and Clarence as the owner of Carterville Garage. Clarence sponsored the race team many times. He had a lot of fantastic stories to tell me, of which I was delightfully entertained. He mentioned a day that dad helped him overcome a carburetor problem by showing Clarence how to rebuild a carburetor so it would pick up fuel while in the turns. There was a trick in the adjustment of the floats. He said, "Fred your dad would never hesitate to help a fellow driver any way he could". Clarence also mentioned that there was not a better sportsman in the field than Corky Felker, dad's car builder and owner for many of his racing years. Clarence had a few photocopies of articles from a Speedway Program and from our local newspaper, The Joplin Globe. He kindly gave me the copies which included the picture above taken at the Beaver Lake Speedway in Rogers, Arkansas in 1972. Clarence accomplished great things during his many years of racing making history in several categories not the least of which was an impressive tally of wins along with holding the record for "most laps turned" at the Nevada Speedway in Nevada, Missouri and the "oldest driver" to compete there. He mentioned that one other driver older than himself incidentally broke Clarence's record one night but when he heard about it, he made a special trip to the Speedway for another race and to regain his title! Still competitive, even today! I'm thankful to work here in the FastLane at HomePro where I get the opportunity to reminisce with many people from all over the four states about our local hero's of stock car racing.
Posted by Home Pro Blog at 11:21 AM No comments: