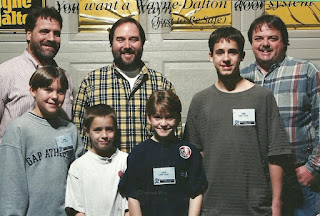 By Fred Tullis:
This picture was taken at the NAHB International Builders' Show in Dallas. We and our boys, (from left to right, John Jr., John's oldest son, Joel, my youngest son, David, John's second son and Fred III, my oldest son) had a great time viewing the latest and greatest in home improvement and we got to meet some famous people too! When I saw this picture I showed John the striking resemblance between myself and Richard Karn. He said, "I don't think so Fred".
Posted by Home Pro Blog at 8:33 AM No comments: