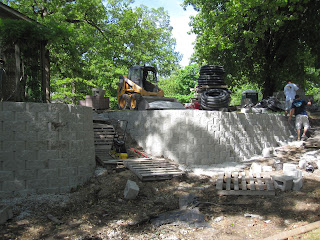 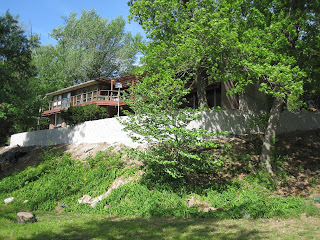 By Rod Haynes:
Approximately two years ago there was an elderly couple who lived in a very nice home on a bluff overlooking the beautiful Spring River near Riverton, Kansas. Unfortunately that spring they received over six inches of rain in a very short amount of time. The deluge of water that was running around both sides of their home was so severe as it cascaded toward the river that it completely washed away the stair step railroad tie retaining wall system. This not only ruined their beautiful landscaping layout, but it also left the foundation in a jeopardized situation which could have led to destabilizing the house structure itself. This couple, who were in a panic mode, came into Home Pro eagerly wanting to know what could be done before more damage might ensue upon their property. Home Pro immediately sent representatives out there to survey the damage and devise a plan for the solution. What ended up happening after a huge clean up effort was a stone terracing system which started down close to the river and progressed upward towards the house. Massive amounts of fill dirt were hauled into the project along with a beautifully manicured concrete stairway system. When the job was over there was a very grateful as well as very relieved couple.
Posted by Home Pro Blog at 11:56 AM