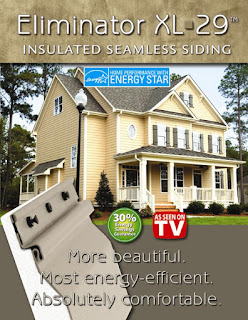 By Rod Haynes:
Recently I made the acquaintance of two people who were neighbors of each other from Parsons, KS. and both of them were involved in the violent hail storm that struck Parsons in early March. The unusual difference between the two is that one of them was a victim of the storm and the other wasn't. The reason for the difference was that one of them had vinyl siding put on by a local contractor and the other had the " SHURE-STRAT POLYMER SIDING " by Home Pro of Joplin, Missouri. It was quite extraordinary to see the differentiating results that the storm had on the two products. The vinyl siding that was nailed on was literally pulverized and partially blown off the wall, whereas the Polymer siding was virtually undamaged. After seeing the two houses I can certainly say, " if you aren't screwing it on, you're screwing it up."
http://sidingmfg.com/polymerwallsystem.html
Posted by Home Pro Blog at 2:15 PM